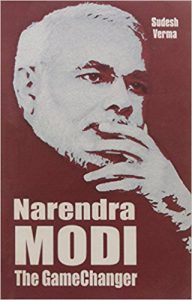 About the Book : Narendra Modi-The Gamechanger for the first time, Modi has been quoted in any book talking about the hitherto untouched aspects of his life. The book is based on extensive interviews of the Gujarat Chief Minister and his close relatives about the influences that shaped his thoughts and actions. The 400-plus pages talk about the inspiring stories that made Modi what he is today—how he evolved as a man of development and empowered people with his decisions, and how he faced the poison-laced barbs of his critics who were ready to tear him to pieces for a crime he never committed. Modi’s journey from a tea-seller to becoming the prime ministerial candidate of the opposition National Democratic Alliance (NDA) has been one of struggle, dedication, determination, hard work and perseverance. Since his childhood, Modi has been an early riser. He does not go to bed until he has finished his work. An average Indian finds his own reflection in the struggle of Modi. Like Modi, he can dream big. Yes, he can! When he was a young boy of 13, he received a near-fatal injury due to attack by a crocodile in the Sharmishtha Lake he swam daily. He was bed-ridden for more than a week. “It hit like a sword on my ankle,” he said and showed to the author the scar he got due to the nine stitches. Modi was a victim of child marriage, a usual practice in the backward Ghanchi caste, but his desire to serve larger causes persuaded him to skip the final stage of the three-stage marriage. When he left home to become a wanderer in search of truth, he took formal leave of everyone, including his mother. The Modi family had ancestral links with Rajasthan. How Modis became a backward oil pressing community in Gujarat is baffling? Some say that the original backward Modis migrated from Bihar, where there are still people with the Modi surname in oil pressing trade.

Related Articles
We will be happy to hear your thoughts